The Annotated Reader is a publication-as-exhibition and exhibition-as-publication conceived by Ryan Gander and Jonathan P. Watts.

“Imagine you’ve missed your last train – what single piece of writing would you want with you for company in the small hours? “

Ryan Gander and Jonathan P. Watts invited a range of people, encompassing contemporary artists, designers, writers, institutional founders, musicians and more – to imagine they’ve missed the last train. “Perhaps this text transformed your thinking.” they wrote in their introductory letter, “It might be a mantra continually returned to. Perhaps it is a text you felt should be read by younger generations or that you wish you’d encountered as a student.”

As part of the exhibition, each of the contributions are printed and exhibited. Visitors to the exhibition are able to compile their own ‘ANNOTATED READER’. In addition, a vending machine distributes USBs’ containing the entire ream of submissions at the cost price of £5, with the ability to either be printed or read digitally.

The mission of Gander and Watts was to create a free and accessible educational resource and index for future generations, alongside being an archive that captures the unique perspectives from hundreds of contributors, who for Gander and Watts are, at the forefront of our contemporary society. 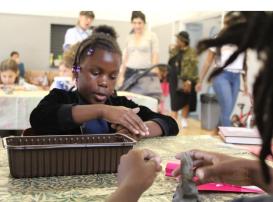